When building a chicken coop, you have to think about keeping your chickens safe, right? The little darlings are greatly desired by predators like racoons that will sometimes go to great lengths to get in and get ’em. You lock the coop door at night, bury the chicken wire in the ground around the run, and keep a close watch every chance you get. You do it because, somehow, a raccoon will find a way to get to your chickens if you don’t. But how do they even know you have them in the first place? Well, one of the main ways is the smell. A smelly coop attracts all kinds of unwanted visitors.

Poop removal is the number one, most important thing to do. Since I (and I alone) take care of our nine chickens, it would break my back to keep it clean enough to keep the smell down. Good thing I happened to be talking to a neighbor who told me about using sand.* I took her advice to “think about it” and did extra research online. What I found was enough to convince me.

I added a two-inch layer of coarse sand to the coop floor. Use coarse sand, because light-weight sand holds onto moisture and tends to clump.

The best tip of all came from another blogger who says to attach hardware cloth to a pitch fork and use it as a scooper to pick up the poop; allowing the sand to fall through. Brilliant, to say the least.

You’d be surprised at how this eliminates the smell! And I only scoop twice a week – still no smell. Twice a year – January and again in July – I take out all the sand and start over. During the July cleaning, I pick a hot day to scrub it down with soap and water… and the earlier the better, so it has time to dry before I replace the sand. No one will ever know I have chickens. (Unless they see and hear them. 🙂 )

Smell is one thing, but of course, critters can simply happen across the coop by accident. Find out what predators you have in your area and take steps to prevent an attack. I knew from research that we’d have trouble with snakes and hawks, too. So, we raised the coop, which gave us a twofer: It’s harder for snakes to get inside, and the chickies have a safe place to run to when the hawks are out.

Then we covered the windows with gopher wire, which allows me to keep them open at night for ventilation. Now, anything that is small enough to slither in through this wire is just food, right?

And, last but not least, we covered over the entire run with chicken wire. It’s tall, so we can comfortably walk inside to rake. I’ve seen runs that are open** (small, fenced-in areas) which would be ideal, but I can’t take a chance. We’ve had one incident to date (I thought I could free range in the very beginning…lost a beautiful Wyandotte to a hawk) and since then I’ve seen skunks, raccoons, wild dogs, kingsnakes, hawks and (attacking) turkey buzzards. My neighbors tell me that’s only the half of it. Lesson learned.

Well, let’s hope this does it… a secured coop, “prevention” tactics like keeping the smell to a minimum, and always keep the eyes open. Just in case.

*There is a debate on whether sand is bad for the health of chickens, and I personally have to disagree. I tested straw and then wood shavings in the past and noticed my White Leghorns had developed respiratory problems with both. And the straw made them sneeze! Two years later and no health problems since switching to sand. I think this method is a keeper!

**I started using movable fencing for daytime excursions in the garden, and everybody’s happy.

Each post has deer fencing stapled to it with pipe straps at the bottom. I slip the posts onto metal pipes that are attached to movable stands. This allows me to easily move the fence wherever I need to…all by myself. As long as I stay out in the garden with them (to ward off flying predators) all is good. Freedom for my girls! Yay! 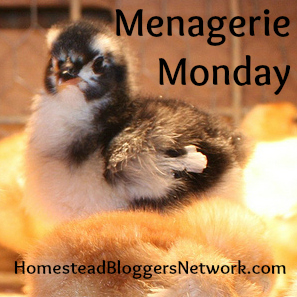 has written 5 posts in this blog.

I am a wife and mother. I stay at home to take care of my family. And I love everything about (the idea of) homesteading. The moment I started talking about my growing interest, bits and pieces of information about my grandmother started coming in...I learned she was a homesteader at heart. And this passion I have for working the land, cooking, crafting, and just taking a hands-on approach to life, certainly came from her. We now own a small farm where I grow and craft for local markets and events.