One study found that if fathers held their newborns against a bare chest while mothers recovered from a Cesarean section, their babies slept better, cried less and, later, had a much easier time learning to breastfeeding with Mom. Our very first instinct after birth is to seek human contact. Later, babies continue to thrive if they are held often and close.

The ultimate feel-good “bonding hormone oxytocin rises during physical contact between a newborn and his parents, increasing the feelings of attachment between members of the new family.”It’s not a crunchy, hippie idea that babies need to be held a lot. A famous (and heartbreaking) experiment proved that we need so much more than food to develop properly.

Harry Harlow experimented on newborn monkeys separated from their mothers, and you still can see Harlow’s original footage of what happened. The study really did rock the world, not just the scientific community. Warning: Possible side effects of watching that video include tears, nausea and extreme donations to PETA. Harlow’s type of experiment is no longer considered ethical, thank goodness.

A historical even provided us with horrific proof that human babies desperately need to be touched: when the Soviet Union fell, the West bore witness to the tragedy of Romania’s now-infamous orphanages. Children who are not held, touched, played-with and loved never recover. The NPR link above provides a wealth of more information about the Romanian orphanages, including updates on how the system has improved (and hasn’t) and how those orphans fared later in life. 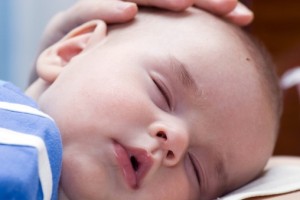 Forgive me for all the drama; my older sister is a developmental psychology professor, and I share her fascination with child/caregiver relationships. One final note before I move on to happier things: It’s actually quite difficult to fail a child in this way; kids are resilient and only mentally ill or inhumanly overwhelmed caregivers never pick them up. And, when placed in proper care at a young age, even the Romanian orphans “caught up” to their peers.

Now, I’m sure you already knew that babies need to be held. Babywearing simply allows you to hold them closer, for longer stretches of time and more comfortably. Why wouldn’t a baby prefer going out in a carrier or napping in sling?

“Attachment parenting is not the same as indulgently giving your child everything she asks for. … New parents often ask, “Won’t holding our baby a lot, responding to cries, nursing our baby on cue, and even sleeping with our baby spoil her?” Or they ask if this kind of parenting will create an overly dependent, manipulative child? Our answer is an emphatic no. In fact, both experience and research have shown the opposite. Attachment fosters eventual interdependence.” Dr. Sears on Spoiling

You really cannot spoil a baby by holding her too much; don’t worry–you will not end up having to wear or hold a baby all the time. They will still want to explore the world around them and will not expect to be held all day and all night. Babies are so super-talented at adapting, in fact, that we can lead them towards a babywearing schedule that works for us as caregivers and feels great for them.

Image Credit: A Mother with her Infant in a Pouch Baby Carrier

Anne-Marie Lindsey is a stay-at-home-mom, aspiring HypnoBirthing Instructor, mental illness fighter, wife, dog owner and auntie. I write about everything, including the beautiful, fun, peaceful, scary, stigmatized and painful on my personal blog, Do Not Faint where motherhood meets depression and anxiety!

Alaina Frederick has written 29 posts in this blog.

Alaina Frederick is a wife, mother of 4 (boys!), and lover of a good cup of herbal tea.