Well, it’s official. Today I crossed an unexpected line. I am – *gulp* – a soccer mom. I wasn’t sure how I would feel about that, to be honest. After all, soccer moms have come up a notch on the frump-o-meter since Sarah Palin stepped on the scene. But still……. 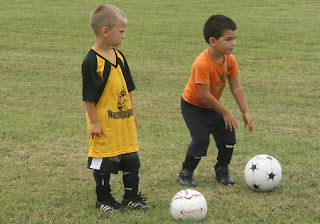 (Picture #1 – No surprise here – Mine is the one in motion. Evan prepares to kick the ball into the bowling pins for a training exercise.)

It was true – there were cliques galore. There were the “we’re sporty moms and could outplay our kids” moms. There were the “we’re here to socialize and have mixed drinks in our sports bottles and haven’t looked to see what our kids are doing in the past two hours but don’t our newly-enhanced-boobs-look-good moms”. There was the Hispanic contingent who’s children outplayed everyone else’s and had probably been playing soccer with their dads (all in attendance and playing on the sidelines themselves) since they could walk. Put me to shame that I hadn’t done more with my kiddos to put them in touch with this heritage sport of theirs sooner.

Then there were the moms like me. Interested in what their kids were doing. Wearing normal clothes. With normal body parts. Drinking water purchased at the concession stand. Like me. That was kind of cool. Some of them were even taking a million pictures of their children. Like me. 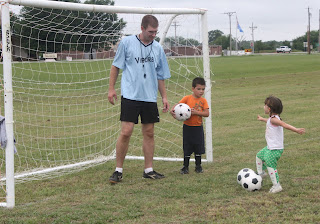 (Picture #2 – Brianna doesn’t let too-big shin-guards slow her down. Evan literally cheers her on as she practices kicking.)

Hmmm….maybe this soccer mom thing won’t be so bad. But, what I was thinking over our charred hot-dog lunch, watching my kids laughing and trying to kick the ball into the net, is that even if the experience of being a soccer mom wasn’t my favorite idea of a great time – well – didn’t it stop being about me the minute they were born? I told my husband after whining that I didn’t know anyone, “Well, I guess we didn’t sign Evan up for soccer for my social hour, did we?”

And it’s true. My children had a blast. Evan learned how to “bounce the ball like this” and “kick it across the grass like this”. Brianna, though a year too young to sign up, would not be left out of the festivities and also learned to kick the ball into the net. A coach had pity on her and gave her a pair of shin guards four inches too big – but she looked adorable. 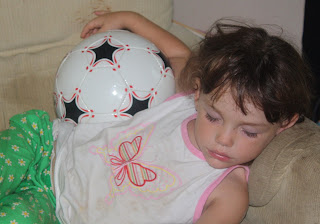 And so, if it will keep my children happy, healthy and give them a chance to wear off some of the near-boundless energy they possess, I will gladly accept the label of Soccer Mom. With pride. And add it to the list with all the other things my children have helped me become. 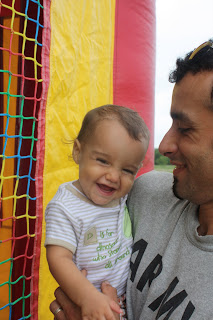 (Picture #4 – Gratuitous Happy-Tickle-Baby-With-His-Daddy picture. Because it’s my blog and I love those dimples. )